Our mission as an academic repository, teaching collection, and museum is to conserve, preserve, and share objects, artifacts, and specimens from Earth’s cultural and natural history for the benefit of current and future generations.

Our collections, like those housed elsewhere in museums and libraries, are rightly regarded as essential for the preservation and transmission of our collective memory. Uniquely, they allow us to establish a space of almost limitless dimensions, and in that space to establish connections between the most contradictory cultures and conventions, and within them to find the patterns that permit history to come together as a coherent page. And, of course, it is from such coherent pages that we – the whole of society – discover the foundations of new knowledge and the impulses for the exercise of our imagination.

The University of La Verne was founded in 1891 as Lordsburg College by members of the Church of the Brethren, in the foothills of the San Gabriel Mountains. Originally housed inside the Lordsburg College building, the Collections served as the school museum, with its objects, artifacts, and specimens used as the school’s teaching collections. The museum was promoted as early as 1913 in the college catalogs.

In 1917, the town of Lordsburg changed its name to La Verne, and the college followed suit. After a new administration building, Founders Hall, was completed in 1926, the La Verne College museum was moved into its new home on the second floor of this building. As La Verne College expanded, the museum was once again moved into the newly constructed Science and Education Building (rededicated as Mainiero Hall in 1994, in honor of educator John G. “Skip” Mainiero).

Through the generosity of famed naturalist Edmund C. Jaeger, to support a working research museum, the La Verne College museum was renamed the Jaeger Museum. For nearly 50 years, Jaeger Museum remained in that location until space in the college was once again an issue.

In 2015 the entire museum was moved to its new quarters at the “Jaeger House,” a newly renovated, environmentally controlled repository with state-of-the-art cabinetry. We are now located on 2nd Street, on the east side of campus, and renamed the Cultural and Natural History Collections.

Among our initial tasks was the installation of exhibits across campus, the first being an architectural homage to Lordsburg College. This exhibit may be viewed in the foyer of La Fetra Lecture Hall. Additional exhibits are located on the second and third floors of the Mainiero Building, with rotating exhibits installed outside of the President’s office on the first floor of Founders Hall, and inside the Wilson Library.

In 2016, CNHC permanently installed “Smiley,” a fully articulated and authentic saber-toothed cat (Smilodon fatalis californicus) on the 2nd floor of the Sara and Michael Abraham Campus Center. Donated by James Z. Gilbert during La Verne College’s 25th anniversary year, Smiley was restored by the Collections staff and reintroduced to the community on its centennial anniversary, during the 2016 Homecoming celebration of the University of La Verne’s 125th year in existence.

The University of La Verne and its Cultural and Natural History Collections are located exactly between the Natural History Museum of Los Angeles and the San Bernardino County Museum, ideally located in the San Gabriel Valley. 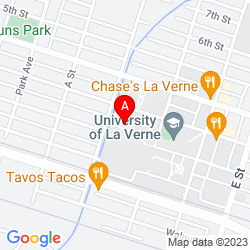